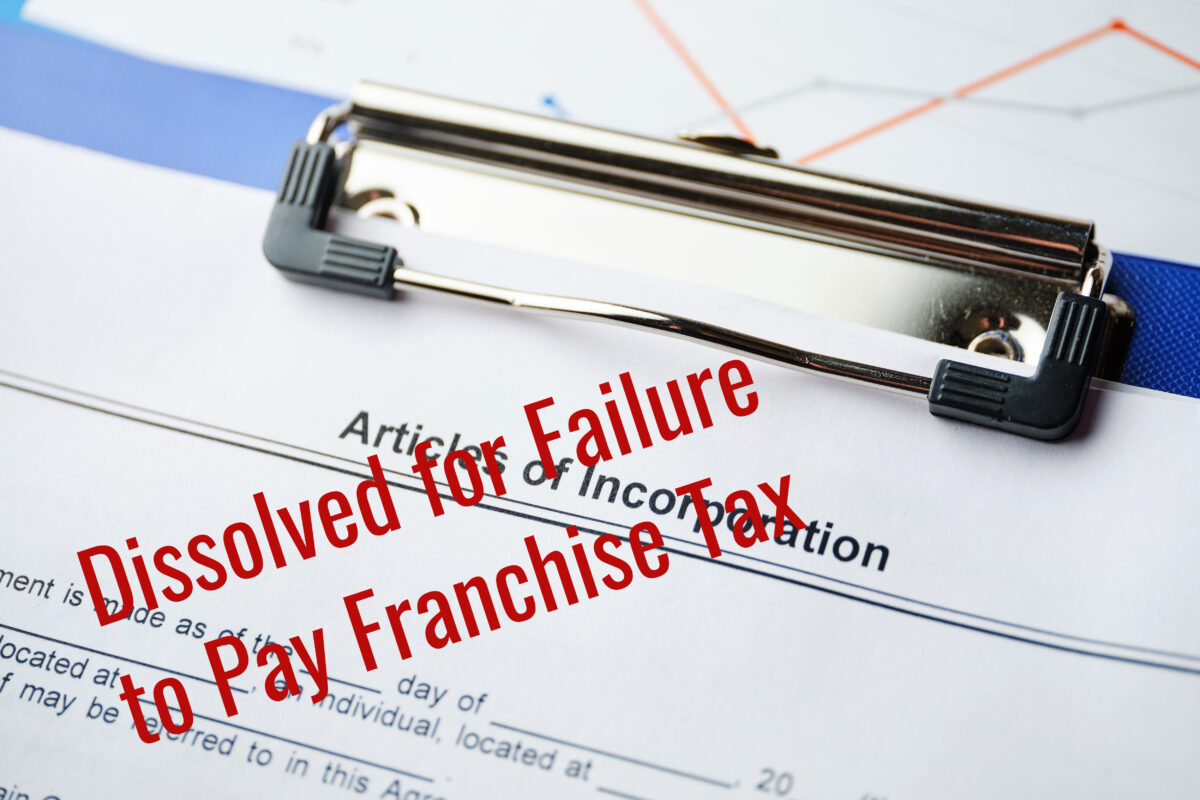 When does a tax forfeiture involuntarily terminate an entity in Texas, and can a terminated entity file and defend claims in court?

The Court of Appeals recently ruled in an interesting case involving an LLC, G Force Framing, which has important implications for corporations who have been or are in danger of being administratively dissolved for failure to pay their taxes.

When an LLC’s charter is forfeited for failure to pay franchise taxes, and they do not correct the problem within 120 days, the LLC loses the right to conduct business in the State of Texas. When the LLC clears its tax debt and gets reinstated five years later, can it then sue or defend against claims that arose while its charter was forfeited?

The Court of Appeals says yes it can – although the LLC would have been barred from suing or defending claims under these facts if the old Texas Business Corporations Act (TBCA) applied, the legislature removed this language from the newer Texas Business Organizations Code (TBOC) that replaced the TBCA.

If an LLC’s charter is forfeited for failure to pay franchise taxes, that no longer means that the LLC is also involuntarily terminated under the TBOC, and, once the LLC is reinstated under the Texas Tax Code, its right to file suit and defend claims is restored.

In 2014, G Force had its corporate privileges forfeited for failure to pay its franchise taxes. Despite the forfeiture, G Force entered construction subcontracts in 2016-2017, filed mechanic’s and materialman’s liens in 2018, and filed 24 counterclaims after the owner filed suit against G Force for breach of contract and negligence.

In 2019, five years after the forfeiture and the same month that the trial court dismissed its counterclaims, G Force cleared its taxes with the Comptroller and was issued a Reinstatement.

The trial court granted summary judgment for the owner, Stoneleigh, on grounds that G Force could not sue or defend because of the tax forfeiture. Subchapter 171 of the Tax Code says that, when there is a forfeiture, the corporation cannot transact business, sue, or defend claims in court:

The comptroller shall forfeit the corporate privileges of a corporation on which the franchise tax is imposed if the corporation: … does not pay, within 45 days after the date notice of forfeiture is mailed, a tax imposed by this chapter or does not pay, within those 45 days, a penalty imposed by this chapter relating to that tax.

G Force was subject to the Texas Tax Code as a “taxable entity,” the comptroller forfeited G Force’s right to conduct business in the state, and G Force did not “revive its forfeited privileges within 120 days after the date that the privileges were forfeited” (see TAX § 171.309).

But – the Texas Tax Code does not contain a time limitation for setting aside a tax forfeiture, and the tax forfeiture was set aside. Therefore, unless G Force was involuntarily terminated under the TBOC, they were free to sue and defend claims in court…

G Force was not Involuntarily Terminated Under the TBOC…

The Court of Appeals reversed based on the change in language between the TBCA and the TBOC. When the Legislature recodified the Texas Business Corporations Act (TBCA) into the Texas Business Organizations Code (TBOC), they left out a very important sentence.

The Legislature removed the failure to pay franchise taxes as a basis for involuntarily dissolving a corporation.

Under these facts, the tax forfeiture did not make G Force a “terminated entity” under the TBOC because 1) once G Force paid its taxes, the LLC was reinstated pursuant to the tax code, and 2) G Force was never terminated under the TBOC. Therefore, G Force could legally assert claims, defenses, and M&M liens, and otherwise conduct business.

Under the Tax Code, G Force was Forfeited but Later Reinstated

Although it happened five years later (and the claims in the lawsuit arose during the period of time G Force’s charter was forfeited), the tax forfeiture was set aside in September 2019, and the LLC was reinstated.

Under the TBOC, G Force was Never Terminated

Under the TBCA (repealed and replaced by the TBOC), one ground for involuntary dissolution would have been a corporation’s failure to pay its franchise taxes. The legislature left out this provision in the TBOC, however – the TBOC provides for involuntary termination only when the filing entity:

The Court of Appeals notes that it must assume the legislature chose the TBOC’s language purposefully, that the provision for involuntary termination when a corporation fails to pay its franchise taxes was intentionally removed, and, therefore, G Force was never involuntarily terminated under the TBOC.

Since G Force was never involuntarily terminated under the TBOC, the TBOC’s additional provisions providing for 1) a corporation’s limited survival after termination, 2) extinguishment of existing claims after termination, and 3) the requirement that a corporation be reinstated within three years to regain its right to sue and defend claims do not apply.

1 – There was no involuntary termination under the TBOC, and

2 – A forfeiture for failure to pay taxes under the Texas Tax Code does not prevent a corporation or LLC from filing claims or defenses once the forfeiture has been set aside.

This ruling is a substantial change in the law governing tax forfeitures and litigation with entities that have been terminated due to tax forfeitures. In this case, G Force was able to get reinstated five years after the termination and assert claims and defenses that arose during the period of time in which the LLC’s charter was forfeited.